Yesterday I was poking around outside, using words like dicot and monocot with Kate, my kiddo. I was also explaining that most plants have common names and how they can be confusing so she should learn the scientific names when she can. Just exposing her to vocabulary and ideas I didn’t get until adulthood. Anyhow, we got around the yard to the pocket prairie and a meowing began. It was a familiar meow. It belongs to a neighbor cat that only speaks to me because I’ve let him in and out of his house when his people are on vacation. He tolerates a little scratching from me but not always. Which means I love him a lot. Even though he’s a cat.

Last semester in the Ecology of Invasive Species class, one of our our guest lecturers, Dr. Loss, spoke about cats. House cats. Not bob cats or panthers. We learned that outdoor cats are responsible for 60+ extinctions. And I’ve learned from the same neighbors, a long time ago, what goes into declawing a cat which would probably fix the killing of a lot of small creatures but is an incredibly cruel thing to do to any animal. And. Duh. Would defeat the purpose of having a cat for many people. Mouse patrol for the cost of kibble and a few snuggles.

After learning about cats as an invasive species, I have a really hard time liking them. I didn’t care for them before, not in my house, for sure. But what do you do? Exterminate all cats? Condemn them all to the indoors? It’s unfair. As I’m sure it seems unfair not to be able to go to any body of water with your boat and not worry about cleaning it up before leaving the area. Who cares about some little mussels and stuff?? (See zebra and quagga mussels) it’s for the good of everyone long term to worry about and deal with invasive species. And in the case of cats, here’s my advice: fix them! Spay, neuter, fix, whatever. Don’t let them multiply in the wild.

So I have no idea if this guy is fixed or not. His owners are smart adults. I’m sure he’s keeping the mice at bay around our house too, since I see him in our backyard when the dogs are inside. He doesn’t bother me unless he’s trying to talk me into opening a door for him. I do like him tho. When they brought him and his cat house mate home, they were little. They stayed indoors for a long time and when they finally came outside, they wanted nothing to do with me. Until the people went on vacation and I was letting them in and out every day. Ever since then, this one tries to convince me to let him in and out. Even when his people are home. It cracks me up. He sees one value in me and that’s it. Bleh. It makes me happy to finally see who has been bedding down in the tall grass tho. Even though he doesn’t know I grew it and maybe there’s more than one positive attribute to me. Ha. And Kate… well she got to see the cat for sticking with me on the Latin tour of the yard lol. Probably the best distraction ever. 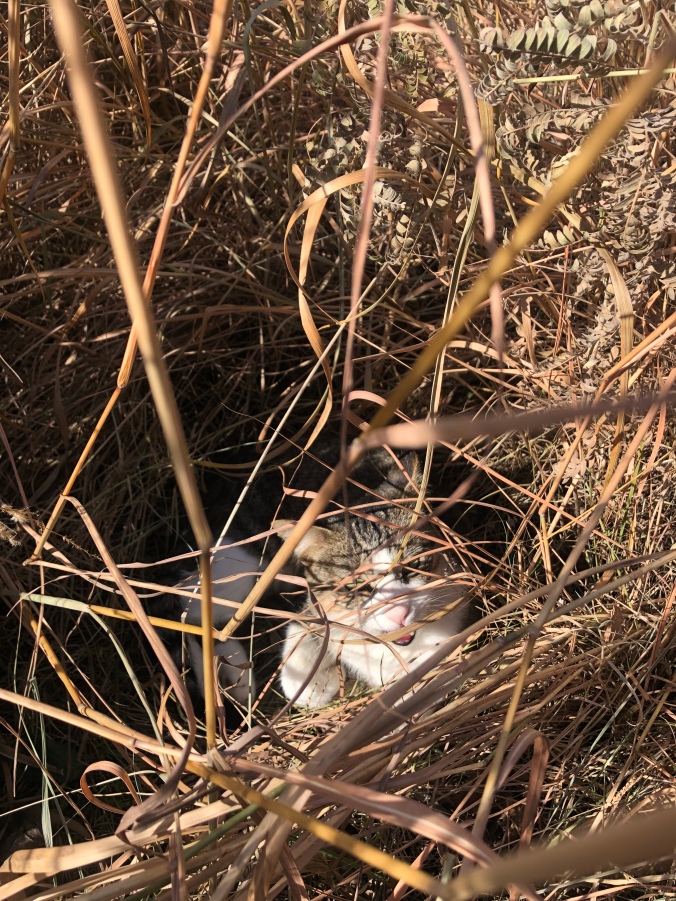 more on that here: